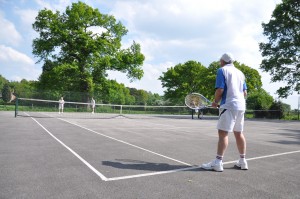 Club days continue throughout the year on  Sunday afternoons from 2pm, and on Thursday evenings in the summer, 6.30 onwards.

Men’s Morning
The men play on a Saturday from 10am but ladies are welcome also. So why not come along and enjoy some good social tennis.

American Tournaments start at 2pm. These are fun Sunday afternoons for all standards of players enjoying the sun(!) and the tennis. Each player pays £3.00, and refreshments are available and you may even win a small prize!

To Be Confirmed- Ken Davies Cup

Once again we will have a Men’s team playing in the North East Cheshire League (Division 8). Please put your names on the availability list or contact Roy Owen on 0161 437 0990. Any new players will be most welcome as we need to increase the size of the squad.

This year  Styal Tennis club is not participating in the Mixed East Cheshire winter league.